Can a Buyer Be Held Liable Earnest Beyond Earnest Money? 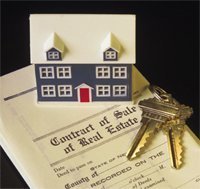 The “standard” real estate contract usually has a provision spelling out the legal remedy of the buyer or seller upon default of the agreement. In most cases, the buyer wants to limit his risk of loss by offering a small earnest money deposit and inserting a “liquidated damages” provision.

Many court battles have been fought over the validity or enforceability of liquidated damages clauses, since they often result in unfair consequences to the buyer. For example, if the buyer placed 10% or more of the purchase price in escrow with the seller or his agent, the seller would get a windfall if the buyer did not close. The seller could resell the property for full price, even more, and still legally keep the buyer’s earnest money. The buyer’s legal argument in challenging the clause is that it result in a civil penalty which is against public policy.

In determining whether a liquidated damages clause is unenforceable as a penalty, the courts generally look at whether the amount settled upon is a “genuine pre-estimate of damages” in the case of breach. C. McCormick, Damages, §149. In most cases, the issue in litigation is whether the amount is too large and thus penalizes the buyer. However, McCormick further states that if the stipulated amount is unreasonably small in relation to the actual damages sustained, the Court will disregard it and permit the injured party to recover actual damages.

The Federal Bankruptcy Court in In Re Ilana Realty, Inc., 154 B.R. 21 (S.D.N.Y. 1993) applied this rationale in awarding damages to the plaintiff upon breach of a real estate contract. InIlana Realty, the purchasers wrongfully refused to close and then sued for return of their earnest money deposit held in escrow. The earnest money was only 5% of the purchase price. The Court used its equitable powers to award damages beyond the amount of the liquidated damages. The Court did so because it found that the amount stipulated was disproportionately lower than damages actually sustained by the sellers. The Court further reasoned that the buyer’s breach and failure to release the earnest money upon breach resulted in further consequential damages to the sellers.

This case brings up another point: what if the buyer is in breach of contract, yet refuses to let the escrow agent release the earnest money to the seller? Courts have sometimes ruled that the liquidated damages provision may not apply and the seller could sue for further damages. The rationale is that the release of the earnest money is a condition of the limitation of liability afforded to the buyer under the liquidated damages clause

This exact issue was presented in Fuels Research Company v. Roberts, 458 P.2d 751 (1969). In Fuels Research, the defendant agreed to purchase a business from the plaintiff, which involved holding certain papers in escrow (stock certificates, formulae, trademarks, etc.). The defendant defaulted on the payment of purchase money after making total payments of $1,000 and refused to return the escrow items to the plaintiff. Plaintiff then sued for breach of contract, and the trial Court awarded the Plaintiff a judgment for $15,000. On appeal, the defendant argued that the liquidated damages clause limited plaintiffs’ recovery to the purchase money paid, that is, $1,000. The Court rejected this argument:

There is little case law on this subject, so the result of a court trial would be unpredictable. The moral of the story? If you fail to close on a contract, don’t play games. Do the right thing and release the earnest money from escrow to the seller.

How to Save Up to 90% on Title Insurance