8 Tips for Cutting Your Losses on Real Estate Deals 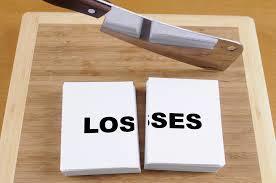 Working in real estate or any other business can be like operating a computer and not doing any backups for your files. With computers, as they say, it is not a matter of if, it’s a matter of when your computer will fail, and you lose all of your valuable, irreplaceable files in the process. With good backup strategies and systems, you can turn a major tragedy into a mere inconvenience.

In real estate, the same principle applies. If you do enough deals over a long period of time, you may have one or two that just don’t perform as expected and you might even end up losing money on one or both of them. It happens to most of us at some point in time. Part of the problem is that we can’t individually control the real estate market and other factors, even locally, for the most part. The other issue is that many experienced and successful investors tend to start to think that they are invincible when it comes to deals and thus tend to slack off a bit and not do as much due diligence on their deals as they have in the past.

Here are a few tips to consider when you have a deal that is going the wrong direction:
• Don’t Chase Your Earnest Money. Some investors that have put a few grand down on a deal that all of a sudden makes no sense and have decided that because they don’t want to lose their earnest money, they will close on it anyway and then try to figure out a way to salvage the deal. Sometimes the best financial strategy is just to let the deal go, rather than throwing more money into a losing situation. Having “escape” clauses in your contract helps a lot also. However, don’t be an investor that becomes known for using those clauses all of the time. You will lose creditability and not be viewed as a serious investor.

• Verify Your Deal with Others. It always makes sense to run the numbers by someone you know and trust; and also has the knowledge and experience to render a valid opinion. This could be a mentor, lender and/or other investors. A good example is a lender (even a hard money lender) that won’t lend on your deal, or other investors that don’t think your deal is very good. If so, there is probably a good reason for the way that they are thinking. Even as experienced investors, once in awhile we find a deal that sucks us in emotionally and we have to learn to separate the fact from the emotion.

• Determine Your Walk Away Point. Business involves a lot of moving parts, but in the final analysis, it’s all about the numbers. To be successful, you have to spend less than what you sell a property for and thus make a profit. Offering too much or spending too much to rehab a deal doesn’t make sense financially. Determining your walk away point is invaluable but you have to stick to it also. In the real estate arenas that I have been involved in including short sales, it’s easy to keep trying to pursue a deal after you have invested a lot of time and some money into it. Better to lick your wounds and spend your time on another deal that makes sense. Easier said than done!

• Have Multiple Exit Strategies. Having both a Plan A and Plan B can make a lot of sense. There have been a couple of times that we have renovated a property and then the local market decided to take an unexpected dip. We could sell and either the deal loses money or we could use another strategy such as renting the property out, selling it on a lease option or selling on a land contract. Although we normally don’t get as much cash initially as if we had sold at full price, it can make a break- even or losing deal into a money maker in the end.

• Await Appreciation. If you are in a rapidly appreciating market, it might make sense to wait until appreciation makes the deal more lucrative. I’m not a big fan of this, but some investors in higher priced states such as California have done well with it. Be Aware! This can be a dangerous game and is really speculation which can come back to bite you. Make sure you have deep enough pockets to be able to do this!

• Bring In a Partner. Sometimes if the loss will be made up in a relatively short period of time and the deal will become profitable, then possibly bringing in a money or credit partner might make sense. Make sure that once the deal is done, that there is enough profit to go around so that you both don’t end up losing money.

• Sell at a Loss or Short Sale. Sometimes it makes sense to sell at a loss and reinvest your remaining funds and time into another deal that will produce the profits you need to run your business. For properties that you already own that have gone “upside down” for whatever reason, sometimes you may consider a short sale where the lender(s) on your property allows you to sell the property for less than is owed on that property. There are several factors that come into play on this (credit hit, seller contributions, etc) that we don’t have time to cover in this article, but on a property that is draining you heavily on a monthly basis, it just might make financial sense.

• Keep Educated and Abreast of the Current Market. Just because the market was great a year ago, some factors may have occurred that have changed it. Making sure that you are constantly aware of the current real estate market is vital in making the right decisions on what is a deal and what is not. Great ways to keep current are attending REIAs, Title Company and Realtor Courses that are available to investors.
Remember, if you are in the real estate game long enough, you may run into a deal that started out great but for some reason became slim. We trust that one or more of these strategies may help you muddle through a deal that has gone or is heading south. Be sure to look at the big picture and consider your options.

Here is to your success!

Another way to be proactive is to protect your hard earned assets before it’s needed. Check out our Bulletproof Asset Protection Course. Everything you need from A to Z.

10 Tips on Decision Making in Your Real Estate Business

Dealing with Real Estate Agents as an Investor